What is Congenital Torticollis? 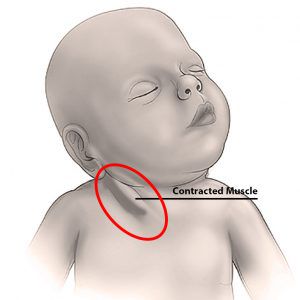 Congenital Torticollis is condition in which an infant’s neck muscles are shortened causing its neck to flex and rotate. It is also called wryneck or twisted neck.

It usually occurs since birth and it can be associated to a wide range of diseases (anomalies of cervical spine and of the cervical-occipital joint, absence of the sternocleidomastoid muscle, etc.). This is why it is difficult to determine exactly its causes before the first year of life.

The most common form is the so called “Congenital muscular torticollis”.

It affects the sternocleidomastoid muscle. When this muscle is stretched or pulled it determines a tilting of the infant’s head toward the injured side, while the chin turns toward the opposite side. In this condition the muscle is shortened and fibrotic.

Congenital muscular torticollis differs from “postural torticollis” which is caused by a malposition of the fetus in uterus. In this case there is no muscle fibrosis and it can be treated with physiotherapy.

Congenital muscular torticollis affects 1,9% of infants at birth. Its cause is still unknown and matter of debate.

How is congenital torticollis diagnosed?

A comprehensive physical examination of the infant usually shows the typical tilting of the head and tension of the sternocleidomastoid muscle.

Differential diagnosis should be always done with a clinical evaluation combined with imaging tests such as ultrasound scans and x-rays.

What are congenital muscular torticollis symptoms?

The most common symptoms of congenital muscular torticollis are:

This pathology may cause a facial and cranial asymmetry.

Treatments of this disease depends on its seriousness.

In mild cases, neck braces can be used in order to make the infant sleep on one side (Torticollis collar treatment).

Stretching exercises (physiotherapy) may be useful, as well.

Only the most serious cases require surgery. This operation consists in lengthening the sternocleidomastoid muscle through muscle and tendons incisions.

Prof. Portinaro’s team performs a surgery that consists in:

The incision is made over the clavicle so that it is as aesthetically pleasing as possible and it disappears in few months. Also the tendon lengthening surgery is made with a specific technique that doesn’t modify the “V” shape of the neck.

After surgery a hard brace is used in order to keep the infant’s head in hypercorrection position (rotation and inclination of the head towards the opposite side of the deformity).

Physiotherapy and motor rehabilitation can be started after a couple of weeks.

Results of this treatments are usually very good.

Prof. Portinaro has examined more than 1000 patients, and analyzed sternomastoid muscle with ultrasounds and neck X-rays.

Prof. Portinaro prefers to approach this disease with physiotherapy to start with and in the resistant case with early surgery.