What is Vertical Talus? 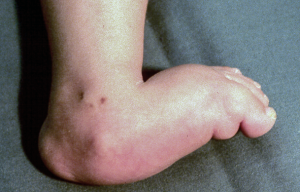 Vertical talus is a less common pathology but it is the most severe foot deformity from a clinical point of view.

Since it is diagnosed at the time of birth it is also known as congenital vertical talus (CVT).

Although it is not painful for the newborn or even the toddler, if it is left untreated, vertical talus can lead to serious disability and discomfort later in life. 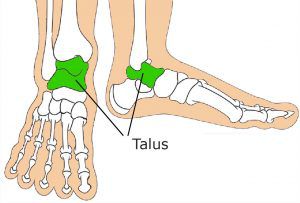 The talus bone, also called “astragalus”, is a small bone in the ankle between the tibia and fibula and the os calcis that connects the lower leg to the foot.

The anatomo-pathological deformity is caused by the astragalus that has grown in a vertical position.

This bone should points towards the toes, but in children with with vertical talus all the anatomical relationships among joints of the mid-foot are disrupted, the bones points towards the ground, interfering with normal land of the medial arch of the foot.

As a result the bottom of the foot looks stiff with no arch, that is why it often called “rocker bottom foot”

Vertical talus causes are unknown not known, but it may sometimes be associated with other neurologic conditions such as arthrogryposis or Spina Bifida.

How is Vertical Talus Diagnosed

Vertical talus can be detected on ultrasound during pregnancy but in most cases it is discovered at birth.

During examination the doctor will manipulate the feet trying to feel the bones inside the foot and determine if the foot is flexible or rigid.

An X-ray of the foot may be useful at a later stage to determine the position of the bones in front of the astragalus and the entity of the malformation.

It is important to treat Vertical Talus as early as possible in order to increase the flexibility of the foot and correct its wrong bend.

If left untreated the foot will remain deformed and become painful.

A non-surgical approach is preferred at first, with manipulation and stretching designed to increase the flexibility of the foot and correct its bend. The positions obtained with the manipulation are kept with serial casting approximately every 3-4 weeks.

Manipulation and casting may solve the problem or decrease the amount of surgery needed.

When the non-surgical approach is not successful surgery may be recommended at approximately 9 to 12 months of age.

Surgical treatments are performed in order to put the bones in their correct position applying a removable pin to keep them in place.

After surgery, a cast is applied to keep the foot in the correct position. Casts and pins are usually removed after 4 to 6 weeks.

Follow up is recommended for a few years to make sure that the foot grows normally.

Prof. Portinaro has been treating Vertical Talus for more than 30 years.