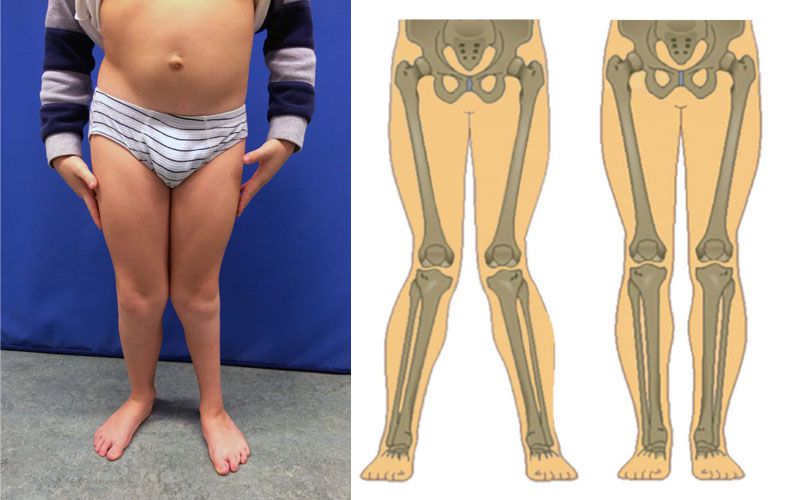 How to fix knock knees

Many parents wonder how to fix knock knees or bow legs, but if your child has one of these conditions there’s no need to worry about. Just keep things under control.

Only if the situation doesn’t improve or tends to get worse with growth, it is better to see a specialist.

When should we worry?

The direction of children’s legs varies a lot until adolescence. During gestation the position of the fetus is curled up and this explains why the knees are physiologically varus at birth. Around 18-20 months the knees often become knocked.

This process continues up to 5 years, when the knees tend to realign. Around 10-11 years, they take the final position that will persists in adulthood.

However, there may be cases in which Knock Knees and Bow Legs do not correct themselves with growth, but they may worsen, instead.

Bow Legs that worsens in the first 20 months of life could indicate an underlying disease.

Anyway also the child’s weight can determine this condition: a “chubby” baby, who starts walking early, around 9-10 months, is often bow legged because his/her weight, burden on the knees and pushes them outwards.

In general if bow legs and knock knees are still severe around the age of 3 years it is important to make a physical examination with an orthopedic surgeon.

These conditions are partly hereditary, but if they are severe it is likely there is an underlying condition.

Among the factors that may cause knock knees and bow legs there are:

When to see a doctor

An orthopedic examination around the age of 2 years in case of bow legs and at the age of 7 for knock knees is often enough to rule out important problems. If the specialist suspects any abnormality, an X-ray of the legs with the child standing may be suggested.

This examination allows to determine the varus or valgus angles and to evaluate the conformation of the growing part of the bone. So the specialist can identify or exclude without a doubt any pathology.

How to fix knock knees and Bow Legs

If knock knees and bow legs are pathological the only possible approach is surgery. The procedure is simple: a small plate is placed on a portion of the bone (femur or tibia, or both) to temporarily stop its growth. While all the other portions of the bone keep their physiological growth. This asymmetric growth allows correcting of the deviation and it usually takes a couple of years to get the right correction and fix knock knees or bow legs.

Take a look also at this video on my YouTube Channel

Book an appointment or an Online Professional Medical Advice Service with Prof Portinaro.